(If you didn’t get to read Part 1, you’ll want to start there first)

…and so it was, we packed our bags and by July of 2012 (not even our first year anniversary), Kenneth got a transfer with his company and we were in a new city – all alone, no friends, no church – just us three. And so it had to be in order for God to deal with our pre-existing conditions and perform that heart transplant He so desperately knew we needed but knew we would never survive in a toxic environment. Just like you have to isolate a disease and target it in order to bring about healing, so it was with us. I did have my brother here at the time who played piano for our church New Life Covenant and he introduced us to some of their leaders. Things started moving quickly – by October I was already singing on the worship team and by December we were launched to start the Northwest campus alongside our new Pastors. We were learning foreign things, in the name of “discipleship” as they deemed it: making fasting a regular part of your Christian walk, praying together as a couple and family, personal daily devotional times, the power of prayer (which I was learning in a woman’s group where I met my new friend I mentioned in my first post), this yearly Daniel Fast thing (sounded dreadful and deadly for that matter) – and they wouldn’t relent. This was being fed to us, spoonful by spoonful, week in and week out, whether we liked it or not (and to be honest, sometimes we didn’t – this was a lot of stuff we weren’t used to and it was uncomfortable).

In those same months, as a couple we decided to start trying to have a baby. We felt we were in a “better place” and figured it was time to start. I had made up in my mind that we wouldn’t need to do much “trying” since I got pregnant with Jianelle by practically just looking at me so this would be no different. But hey, that was almost nine or ten years ago so maybe things had changed a little. We tried month one, two, three, four, five – wait a minute, something’s not right here. I had independently decided to go to the doctor and I did. I made my appointment: “Mrs. Figueroa, you’re good to go – your womb is ready to receive and carry.” Ok, so now what? The doctor said that we needed to have been trying for a year before they categorized us as “infertile” so technically we were getting ahead of ourselves, but she gave me a prescription to get my husband checked. And so we did. The test results came in and they were abnormal. They had him repeat it three times before referring us to a specialist and so it was, three times abnormal – go see a male infertility urologist. And so we did. “Mr. Figueroa, you have a pre-existing condition. Your body does not make sperm and we cannot explain to you why, there is nothing wrong with your anatomy. You have unexplained, non-obstructive azoospermia.” Ok, so we can fix this, right? Give me options. “Well we can try to do a biopsy and see if we can extract any sperm.” Sign us up! And on January 23, 2012, during our first “Daniel Fast” we got the news that would forever change our lives. No, this wasn’t the plan and honestly, for a girl who comes from a family of doctors, we don’t take no for an answer very easily, there’s ALWAYS a fix. I can fix this. Boy did I try (and looked like a crazy woman while at it, calling every specialist in the city of Chicago to see my husband) but oh, was I ever so wrong. They found nothing, all these “specialists” found NOTHING. NADA. ZIPPO. We were left with only two options – use a sperm donor or adopt.

His pre-existing condition had just come to light, yet mine had been exposed a long time ago during my crazy episodes that came from a distrusting heart over a previously broken marriage – those symptoms we just brushed under the rug, patched up, and made up. You see, both of us came into this marriage with pre-existing conditions that were destined to ruin us and bring us to our demise. Did it matter that my condition was more “normal or typical” than his? Did it matter that his was spoken by a medical doctor out loud and no one had ever called mine out? He had accepted and loved me despite my heart condition and the enemy was begging me to run away from his physical condition. “Just leave him, what’s the point of being married if you can’t even procreate together, he’s not a real man, he can’t even provide you a family, etc.” And so the lies and the darts came at us just like we were used to receiving before, yet this time, our armor was different.

We had accepted, reluctantly at times, this “discipleship” that was being fed to us by the spoonful and we had begun to grow deep roots in our faith. We were no longer milk drinkers, we were meat chewers (spiritually speaking, because ehh, I don’t like eating real meat). We had begun to pray together, have our individual daily devotional times, we had stopped dancing and drinking alcohol completely, and we had begun making fasting a regular part of our walk with Jesus. This Jesus began to take on flesh in our lives, we had allowed Him into our pre-existing conditions. He began to crush even more my already broken heart, but this kind of crushing is the good kind, the one that brings about oil – oil that reaches deep wounds and brings about true healing from the inside out. He began to mend the insecurities in me as a woman, He began to teach me what true submission to Him looked like first and then began teaching me how to implement that same submission for my husband. I let Him into my really dark and dirty places. Those places that were too shameful to let anyone see before and no doctor had ever professed over my life but the enemy had.

People still tell me today “you’re a strong woman, if it would have been anyone else, they would have left him, what you did was no small thing” and to be honest, that still confuses me to this day – did I have another choice? Perhaps back in my first eleven months of marriage it would have been just what I wanted to hear, a final nail for the coffin I so desperately wanted to bury (my marriage). And most times when we’re desperate, we look for advice that will satisfy our itching ears and provide the final stamp of approval for something we’ve already pre-meditated. And here he was, sitting across that booth at that restaurant when we had been given a death sentence for two from the doctor, expecting to receive the same from my own mouth. But slowly, and boy did we have bad days, God began weaving our hearts back together – with threads of unconditional love and respect for each other. I finally got to a place where I could look him in the eyes and say “I still do take you as my husband. With God we’ll get through this and more, all for His glory. The best is yet to come”.

Married couples – the world begs us to look at ourselves and be consumed with our own happiness, always getting what we want out of our marriage and out of this life. My flesh screamed “I want a baby and I want it now!” My mind and heart easily forgetting the other 80% of completion he brought into my life before trying to have that baby. As women it can often sound like this or something alongside these lines: “he doesn’t make me happy, he doesn’t appreciate me, he isn’t romantic with me, he doesn’t understand me, etc.” and we turn a blind eye to our own pre-existing conditions. For men it can sound like this or something alongside these lines: “she doesn’t make me happy anymore, she doesn’t look anything like she did when I first met her, she doesn’t respect me, etc.” and we turn a blind eye to our own pre-existing conditions. When we stood on that altar, we all took on the same vows: “to have and to hold from this day forward, for better or for worse, for richer or for poorer, in sickness and in health, until death do us part.” When I took on those vows, was there a hidden clause that allowed me a way out based on his pre-existing condition? Mine was emotional and his was physical, what was the difference? I don’t see any loopholes there, do you? Although as humans we often times love to create our own, the most famous being “irreconcilable differences”, as the court likes to put it on those famous divorce papers. I am guilty, I bought into that one twelve years ago and the consequences and pain in the aftermath is what they don’t prepare you for. It is a death sentence that keeps on giving, even when you beg it to stop. Divorce is not the answer. Although if you’ve been through one, like me, God doesn’t condemn us and cast us off as unworthy – He is faithful to take our worst mistakes and use them for good because that’s just who He is (He likes to recycle).

God is begging us to put our battle gear on and face our pre-existing conditions head on and accept those same pre-existing conditions our spouse brought into the marriage – neither one being “prettier or more normal” than the other because guess what? My husband’s diagnosis has statistics of one in one million but our marriage in God’s eyes is also one in one million. His plans for us no one can fathom, our story like no one else’s, unique and beautiful if we let Him in. Don’t cut your testimony and legacy short. God is begging us to hold each other’s hands in unity, to let ourselves be “discipled” by the local church (you are not alone), and let our new habits and roots grow familiar and so deep we cannot be shaken. He is begging us to show our children what warring for our marriage really looks like, to leave behind a legacy of a fifty plus year marriage, which has now become the exception and not the norm. He is begging us to remember that “I Do” in the middle of our chaos and hang onto the hope we have in Him. Infertility, sickness, finances, stress, family division, baggage from a previous marriage, children and step children, careers – they are all reconcilable only when you have God as your restorer – sounds so cliché, I know, and I was one who got tired of hearing it but it’s the truth because it worked for us and I know God doesn’t have favorites. He can do it for you, too. Only with Him will pre-existing conditions become the foundation for your testimony to be built upon. Let Him write your story.

P.S. My amazing friend Marisol Santiago writes a beautiful blog on being uprooted from your comfort zones and transplanted into the soil God has prepared for you. Please check out her blog at www.uprootupgrade.com 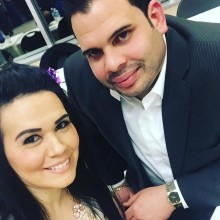 Hi there and welcome to our blog! We hope you will find some much needed encouragement tucked inside these pages. Although each story is one in one million, we share the same hope that the conclusion has not yet been written and the best is yet to come. Read More…